NAAAP Boston was founded in 1986 and is the largest of the 27 chapters and associate chapters in North America. With more than 400 members, we are currently the fastest growing Asian American professionals organization in Boston.

Vision:  To be the premier Asian American professional and leadership development organization in the community

What guides us and what we strive for, from our members to our leaders and sponsors, are our values. In all that we do, NAAAP is committed to:

The National Association of Young Asian Professionals (NAYAP) was started in New York City.  The New England chapter was launched in 1986 at the China Trade Center building, corner of Boylston and Washington St.  Local leaders from community organizations were amongst the 200 people that attended the inaugural announcement of NAYAP New England.   Over 100 new members signed up during the festivities.   As NAYAP begun to evolve nationally the name was changed to National Association of Asian American Professionals “NAAAP,” creating NAAAP NY, Boston (instead of New England), and Chicago.  In 1992 NAAAP Boston was officially chartered in Massachusetts as a 501(c)(3) non-profit organization.

The original founding members of NAYAP New England were:  Richard Ning, Doris Ho (now Doris Lee), Pung Ho, Cynthia Sung, Brenda Lee-Kang (formerly Lee), Angela Oey (formerly Hee), and Swan Oey.  They saw a huge need for Chinese-Americans (later expanded to all Asian-Americans) to learn how to succeed and get ahead in their jobs and professions.  There were (and still are) stereotypes of Asian behaviors to be exposed and overcome.   They wanted to create a place for Asian professionals to get together, share their experiences, network, create personal as well as professional relationships and otherwise…just have fun. 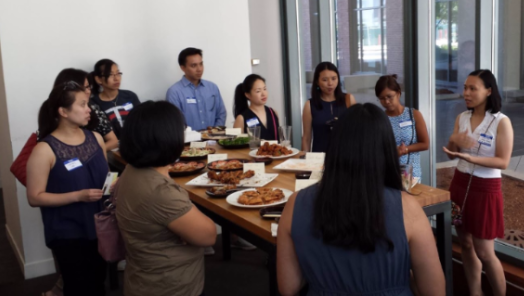 The purpose of NAAAP BEAN is to facilitate and foster an ongoing community among NAAAP Boston's former and current leaders.

Over the years the NAAAP Boston Chapter has benefited immensely from the contributions of many former Committee leaders, Officers and Board members.  They have contributed greatly by developing a wide variety of events, engaging with members, sponsors and partners, developing the Chapter's systems and procedures, managing our finances, and so on.   In turn, the former leaders themselves benefited through NAAAP by acquiring valuable leadership skills and making long-lasting friends.

Former leaders' enthusiasm for NAAAP and their accumulated operating experience are an invaluable asset for NAAAP.  NAAAP BEAN will leverage this asset by fostering networking, sharing of experiences, and mentoring across the broader NAAAP Boston leadership community.